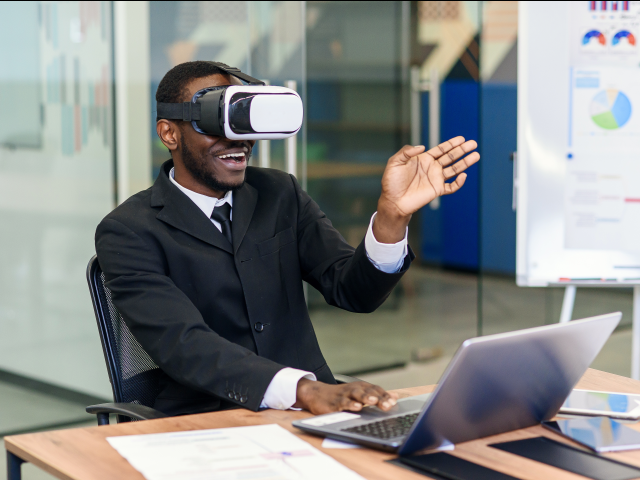 Earlier this month, Facebook CEO Mark Zuckerberg interrupted an earnings call to share his vision for Facebook. He summed it up in one word: metaverse. The metaverse as he defines it is a collective virtual shared space including the sum of all virtual worlds and the internet. It may contain derivatives or copies of the real world, but it is distinct from augmented reality (AR).

The work possibilities it presented were seemingly endless, but it also appeared to be more a pipedream than something enterprises could really get their teeth into. However, last week Facebook announced the beta of a new virtual-reality remote work app where users of the company’s Oculus Quest 2 headsets can hold meetings as avatar versions of themselves.

The beta release is probably not a game changer in the sense that it doesn’t represent a change in direction for Facebook — at least not yet. Facebook bought Oculus Research in 2014, which focused on virtual and augmented reality (VR, AR) promotion, research and development division. It was rebranded in 2020 as Reality Labs and remained a division of Facebook Technologies.

The new beta release is already being hailed by Facebook as the first significant, practical step towards the metaverse and, more to the point, a metaverse focused on work and collaboration. Unveiling the beta, the company explained in a statement:

“The way we work is changing. More people are working remotely, more people want flexible work options, and more people are re-thinking what it means to be in an office. But without the right connective tools, remote work still has plenty of challenges. Working without colleagues around you can feel isolating at times and brainstorming with other people just doesn’t feel the same if you’re not in the same room.”

Named Horizon Workrooms, the app is available for free download on Oculus Quest 2 in countries where Quest 2 is supported. Workrooms is a collaboration experience that lets people come together to work in the same virtual room, regardless of physical distance.

It works across both virtual reality and the web and is designed to improve a team’s ability to collaborate, communicate and connect remotely through VR. Users can join a meeting in VR as an avatar or dial into the virtual room from computers by video call. They can use a virtual whiteboard to sketch out ideas together, bring computers and keyboard into VR to work together with others, or just have expressive conversations that feel more like in person interactions.

VR: The Inevitable Next Step in Remote Meetings?

Les Borsai, co-founder and chief strategy officer at Los Angeles-based Wave Financial Group noted recently the metaverse concept must be versatile enough to handle numerous access points through the internet, VR, and AR. He said Facebook has already made noteworthy progress in this initiative, with Reality Labs pulling together researchers from various gaming backgrounds who are currently grappling with the concept of “presence,” i.e. how it feels to be in a space with others. Facebook is also developing AR glasses, more advanced VR headsets, and even a software that allows users to “teleport” into other digital spaces. The release of Horizon Workrooms pushes this forward.

For Eric McGee, senior network engineer at Spring, Texas-based TRGDatacenters, these kinds of rooms will be the future of communications. He argues that post-pandemic, virtual meetings will remain the norm rather than the exception.

Since virtual meetings are here to stay, McGee said, it's time to enhance participants' experiences. Zoom meetings have several disadvantages including the impersonal nature of the meetings. He argues VR can enhance the experience of those participating in virtual meetings. "It can be used to create a more personable, fun, and engaging meeting environment, which is sure to make the meeting more productive,” he said.

But it's not just about internal communication. Horizon Workrooms and similar also have a future in customer communications, said Nick Shackelford, managing partner of Orange County, Calif.-based Structured Agency. He envisages businesses incorporating metaverse technology and its aspects to advance brand building through products, services, and the customers they represent.

“Including the consumer in the brand’s narrative and allowing testimonials, and in turn, your average consumer to become a product pusher and influencer, will streamline companies’ advertorial campaigns and push brand awareness to new levels,” he said. “We no longer live in the window shopper age."

He also points out that the consumer can buy and return items with ease, reducing risk and improving the consumer's relationship with a merchant. “I see this concept rapidly evolving into an interactive experience prior to making a purchase while perpetuating further engagement between the brand and its buyers,” Shackelford added.

One thing missing from current virtual communication is the humanity of face-to-face conversations, said Greg Rozdeba, president of Toronto-based Dundas Life. Zoom meetings and other video conferencing tools allow you to communicate virtually, but they do not come close to the full-range of human experiences face-to-face interactions provide. “Virtual reality meeting tools such as the Horizon Workrooms help to bring that touch of humanity, we get from normal face to face communication into virtual meetings and interactions,” he said.

Unlike Zoom and other current over-the-internet communication tools, he added, VR provides a more immersive experience by allowing digital and physical realities to exist and interact with one another simultaneously in real-time. Such experiences lead to better collaboration amongst team members, regardless of where they are in the world. It also leads to enhanced learning and interactions amongst the participants.

Horizon Workrooms is only the most recent step for Facebook. The company is not alone in pushing itself into the metaverse space.

Facebook will hold its Connect conference at the end of October as a virtual conference for the second year in a row. The company has traditionally used Facebook Connect to make big announcements relating to its AR and VR tools. Last year, Facebook unveiled its Quest 2 VR headsets and provided more detail on its Project Aria AR wearables project. This year with metaverse and virtual communications emerging as key enterprise tools, we can expect more announcements.

Marc Zuckerberg has already claimed Facebook will successfully transition into a metaverse company in five years, and AR glasses and VR headsets will be ready for daily mainstream use by 2030. However, this is no small task.

For one, Facebook must be able to make its VR technology compatible with the metaverses of other companies. Facebook must also make its infrastructure completely scalable so that user experience does not lag when more users join. How it fares in this new emerging market will depend on how Facebook and its competitors respond to this challenge.