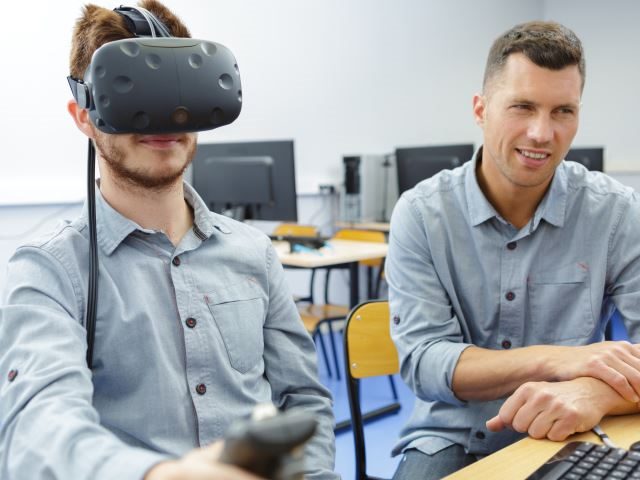 The role of virtual reality and augmented reality in the enterprise was always going to depend on affordability and accessibility. No one ever really doubted their use as business tools, but even for large enterprises with a lot of capital behind them and for much of their development, both technologies have been out the reach of most.

But that is changing and the technology is now at a point where the business benefits are clear, whether that comes from helping to improve productivity, or it involves connecting with customers in new and ways, and ensuring that businesses are employing the right people, with the right skills.

What is more, VR and AR can help to reduce costs and improve a company’s environmental credentials. Even still, with the price reductions and the opening of the technology the question remains as to whether it is enhancing or denigrating employee experience.

A recent survey from Toronto-based Myplanet, a software studio that develops AI and automation solutions for clients such as Uber, Google, Delta, and Salesforce, found that VR in the workplace was among the least accepted forms of virtual reality technology, with nearly 50% of respondents expressing discomfort. It also showed that people prefer VR in their personal lives rather than the workplace — Virtual Reality Gaming had a 32% comfort level compared to VR Workplaces with a 24% comfort level.

Zain Jaffer is the founder and CEO of Zain Ventures who sold his Silicon Valley video-focused mobile ad network Vung for $780 million in 2019. As such he has been watching the development of VR as a work tool from the point of view of a potential investor. He believes that the move toward immersive virtual experiences is a COVID-19 trend that is playing out in real time.

According to Jaffer, the uptick in adoption is coming from three directions.

VR hardware is more affordable than ever, and with other technologies like AI and ML flooding most industries, the software technology is easily integrated into current operations without incurring too many costs.

Second, the reduction of in-person activity across multiple touchpoints of the corporate experience — training, retail, and customer experience — such that VR provides an important compensatory addition to our at-home lifestyles.

VR has incredibly promising applications when it comes to employee training, up-skilling, and re-skilling operations; three aspects of team building that will continue to be incredibly in our collective COVID-recovery. VR offers employees a more efficient way to learn procedures.

Already tested for its applications in surgical fields, VR has been supported as an option completely equivalent to face-to-face training. It also comes at a lesser economic cost in the long run, and it reduces the time commitment in training programs, allowing the employee to spend more time on their normal day to day tasks. Walmart has reportedly trained more than a million of its associates in VR. Everything from kiosk training to machine operation, the VR platforms provide immediate feedback if a mistake is made.

Related Article: How Tech Brands Are Using AR and VR to Their Advantage

Teams are also using VR to increase intra-company engagement. VR can help increase collaboration and boost creativity during remote working. It can help teams visualize their projects before they come to life and share in more detailed versions their early-stage ideas. While it has still not been perfected to the point where teams want to spend the whole day behind a headset, it is a promising step toward the future of conferencing technology.

“VR is taking a forefront role in the digital workplace,” Jaffer said. “3-Dimensional configuration technology has proved to facilitate a better interface; companies that have replaced 2D product displays with 3D demonstrations achieve a 40% higher conversion rate on sales."

VR is currently being used to help create better e-commerce experiences, he said, and it's allowing distanced customers to have a more immersive retail experience from their home.

Santa Monica, Calif.-based Vertebrae CEO Vince Cacace has been directly involved in the rise of augmented reality over the past decade. The company provides virtual try-on and 3-D visualizations at accurate size and scale. He pointed out that augmented reality has also received a huge boost from the retail sector, especially as physical shops have been forced to close temporarily in response to COVID-19.

Until now, the technology, which lets shoppers interact with digital objects superimposed on their physical world, has seemed more futuristic than useful. As the pandemic accelerated the shift to online shopping by five years according to (IBM), he said augmented reality is moving up the priority list. The technology is poised to get even more popular this year as the new technology improves and as smartphone cameras begin to detect depth and distance, making it easier to place objects in physical spaces.

“While 3D/AR was initially used for large scale items, I think it’s exciting that smaller brands and smaller items (sunglasses, hats) can afford and benefit from this technology,” he said.

The bottom line is that VR has taken a 180 degrees turn ever since COVID-19 hit the world, it has revamped how people think and has completely amended the ways people interact with one another, Alex Berman, founder of email10k, said.

Today, it is used as an excellent way to connect with one another and conduct collaborative meetings. Employees can discuss ideas and work together on projects from different parts of the world, also they can easily put down their thoughts in a way that is understandable for the client. The best part about VR being implemented in the digital workplace is its use for three dimensional drawings.

Company designers use it to create quick models and view them in VR to have a fair idea about the scale of space and make further changes in the detailed models.

As an example, he cites virtual travel. VR, he says, lets you experience your desired hotels, it gives you an insight about different caliber guestrooms and how the lobbies are. This encourages bookings as one can view the hotel in real time beforehand. This boosts revenue in the long run!

VR has huge potential for the digital workplace as a training tool for remote workers and onboarding new employees. When it comes to learning and practicing new skills from home, employees are usually limited to traditional learning methods such as online courses, videos, and PowerPoint presentations, Derek Belch, CEO of  Palo Alto, Calif.-based Strivr, said.

People learn best when they feel engaged in the learning and receive 1-on-1 coaching, but this becomes difficult when communication with a trainer or mentor is done via a video conferencing call where distractions from phones and family members can disrupt a trainee’s concentration, he said.

The immersive technology of VR overcomes these challenges by creating a digital environment free of distractions and actively engages the trainee with instant feedback. For example, companies can use VR to allow managers to practice soft skills such as communication, empathy, and leadership.

These VR modules can use video recordings or animations to simulate tense scenarios for managers to practice their handling and ability to navigate through the issue successfully. Since it does not require supervision from a dedicated trainer, employees can use VR to practice repeatedly until they feel comfortable and confident in their abilities.

“Since VR can also be used for collaboration in meetings or for fun as a way to connect employees together for holiday parties, VR might just become an essential to the digital workplace,” he added.