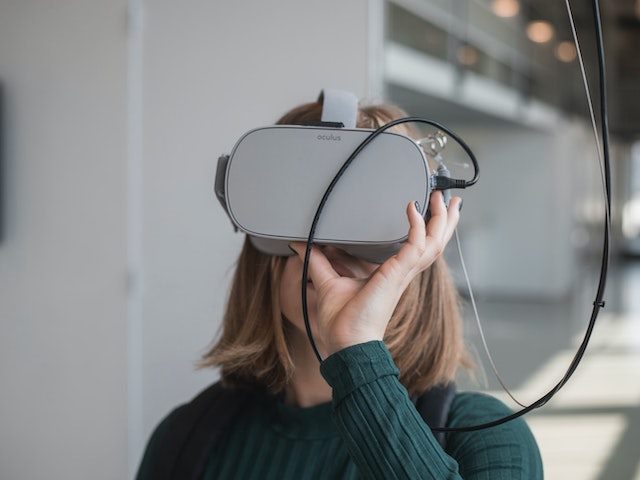 How Companies Use VR in the Workplace

Virtual reality (VR) may still be considered nascent but it is already considered a valuable tool and seeing increased relevance and use within all aspects of society. Most of us recognize that VR makes gaming a more immersive experience, and educational facilities are using it to help make training more effective. But businesses are also finding that VR can help improve results in and out of the office.

It may not yet be top of mind for many leaders, but a good number of businesses have begun integrating virtual reality into their activities. In fact, as early as 2018, data showed that 35% of businesses had already integrated VR into their business in at least one department, and an additional 27% were piloting applications within their company. Only 14% had no plan to apply VR at all — a very small percentage, especially when considering how much things have evolved since then.

There are numerous economic advantages for businesses to utilize VR. PwC expects the technology, together with augmented reality (AR), could inject $1.5 trillion into the world’s economy by 2030. It also predicts it could lead to as many as 23 million jobs across the globe.

The U.S. is among the countries whose economies are expected to see the most significant rise in VR usage in the coming years, particularly in already-established areas like gaming and entertainment, and education, where the technology is used to train for challenging situations under safer conditions.

4 Potential Uses of VR in the Digital Workplace

As the technology evolves, many sectors and departments are finding innovative ways they can incorporate VR to gain efficiencies — and an edge on competition. Here are four emerging uses of the technology in today's workplace.

Training is a prominent area where organizations can build strong use cases for VR. The technology provides a hands-on approach to learning without affecting the real world.

Christopher Lind, chief learning officer at Florida-based ChenMed, said he has been using VR to engage and develop employees for several years now because the technology simply offers a better training environment, where mistakes aren't costly. He said it also provides a more relevant and realistic training experience that speeds up employees' understanding of real-life scenarios.

Plus, Lind said, managers can more easily adapt training materials to the needs of each employee because scenarios can be loaded into a training program controlled by the trainer based on a person's ability, experience, job role, etc.

One of the biggest challenges of remote and hybrid work is communications. Meetings can feel impersonal. Speaking to numerous faces on a screen doesn’t tend to offer the same depth of connection that sitting in the same room as others can. VR can change that.

By having teams connect in a virtual room, employees can feel a stronger connection to coworkers because the technology mimics the in-person experience. The system helps improve engagement with peers by allowing participating parties to communicate via other means, such as body language, which is limited by space on a computer screen.

“Leaders can turn to VR to connect their teams in an authentic way, making meetings in tools like Meta’s Horizon Workrooms just that much more immersive, collaborative and productive — whether someone is in-office or remote," said Ade Ajayi, head of global sales of Reality Labs at Meta.

Building on the use case of VR for communications purposes, sales teams are also likely to find the technology a game-changer in their role. Not only can it support their interactions with potential clients, but it can also reduce travel costs and position the company as a true innovator in its field.

Beyond the one-on-one, companies are also turning to VR to sell products and services. In this aspect, prospective clients are greeted and served fully in the virtual reality world. Office leasing, car sales and event management are just a few examples where the technology could be used in this manner. Companies that rely on pre-production sales can also find VR useful in getting the numbers up before projects start because VR is ideal for showcasing concepts in an attention-grabbing way.

Related Article: Why VR Training Is Poised to Grow

Recruiting professionals have had their hands full with new technologies in recent years. Talent has been a top issue, and vendors are releasing numerous applications and software to support recruiters in their role. VR's selling point is that it can make interviews easier and more interesting than the traditional telephone call.

Aptitude and skills tests can also be conducted in VR to assess knowledge and fit. These tests could even piggyback on trainers' programs, thereby putting the candidate in a true rendition of what they would experience on the job.

For Stavros Zavrakas, co-founder and managing director of Cambridge, UK-based Orthogonality, finds value in using VR to attract new talent. “Leverage career fairs and use VR headsets to give office tours to candidates, which will give them a holistic idea of your work and thus help you recruit people of interest,” he said.

Across all of these scenarios, VR requires an initial investment and integration phase, but it is designed to eventually be a real cost-saver and a great way to further the benefits of the digital workplace.