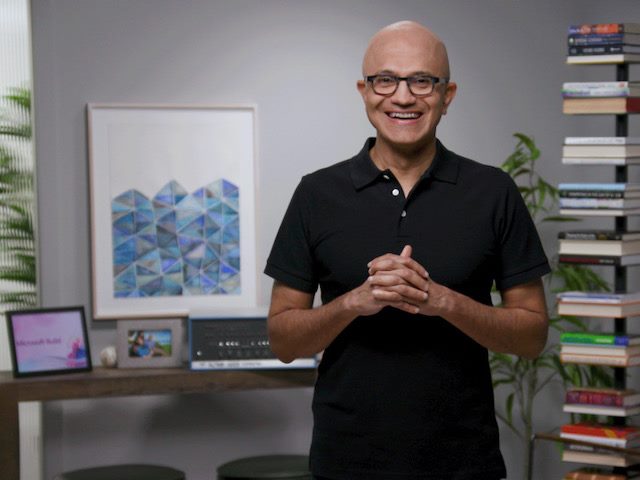 Microsoft Build took place this week, so it’s time to sift through the dozens of announcements made over the course of the three-day conference. Build covers the entire Microsoft portfolio of products, so we'll focus on announcements that directly relate to the digital workplace or have implications for it.

Microsoft CEO Satya Nadella kicked off the event by emphasizing that the company's 12 month roadmap is focused on releases that enable work, both onsite and remotely. In his keynote, he summed up Microsoft’s workplace philosophy by noting the company is focused on “building what the world needs.”

What that means in terms of technology can be boiled down to cloud computing, data management and protection, and artificial intelligence. While he shied away from details about Microsoft's metaverse plans, the AI offerings are clearly designed to support that – our words, not his.

Below are five of the major releases coming out of Build to support the digital workplace:

Unsurprisingly, the focus when it came to the workplace and enabling collaboration was on Teams. This year announcements focused on the integration of Teams with developer tools and the introduction of a new AI tool called GitHub Copilot, which, according to Microsoft will reduce coding and development times by up to 30%.

Take the example of Live Share, an SDK designed to transform Teams apps into collaborative multi-user experiences without writing any dedicated back-end code. It also integrates meetings with the Fluid Framework.

Microsoft first introduced the Fluid Framework in public preview during its 2019 Ignite conference. Much as the name promises, the software was designed to make collaboration seamless by breaking down barriers between apps. Fluid makes it possible for users to collaborate on dynamic content and create connected components that can be shared across apps. It can also be used to make apps collaborative due to its data structure, that performs low-latency synchronization and a relay service that connects endpoints.

In practical terms, this means that with Live Share, users can co-edit or co-create content during Teams meetings. This effectively pushes Teams beyond the boundaries of a collaboration tool into the realm of a work tool where content is conceived and developed inside Teams and shared around the environment through integrated apps.

Live Share wasn't the only Teams-related announcement coming out of Build. Microsoft also announced it is opening Loop to third- party developers. Microsoft Loop is an online collaboration platform still under development which which Microsoft unveiled last November 2021 as part of Microsoft 365.

It lets workers use Teams, Outlook and OneNote to collaborate on Word and Excel content within the Microsoft 365 suite without switching between apps.

It effectively makes multiple formats of content portable across apps, while ensuring the content in question remains the most recent version. Loop components can be as simple as lists, tables, notes and tasks, or as sophisticated as a customer sales opportunity from Microsoft Dynamics 365.

At Build Microsoft announced that it will let third-party developers create snippets of live text, spreadsheets and forms in Teams and Outlook to allow more tasks to be accomplished without clicking away from the software. The new blocks will be called Loop Components.

With the new Components, users can evolve an existing Adaptive Card into a Loop component or create a new Adaptive Card-based Loop component. Adaptive Cards are platform-agnostic snippets of UI, authored in JSON, that apps and services can openly exchange. When delivered to a specific app, the JSON is transformed into native UI that automatically adapts to its surroundings. It helps design and integrate light-weight UI for all major platforms and frameworks.

The opening up of Components to third-party developers is a big deal for Microsoft, as evidenced by Satya Nadella demonstrating the latest collaboration capabilities. In the demonstration, a Microsoft worker changed the deadline for a task listed in a form from Zoho's project management application, Projects. The alteration appeared immediately on content blocks in Outlook and Teams.

The SharePoint Framework is a page and web part model that provides full support for client-side SharePoint development, integration with SharePoint data and extending to Microsoft Teams. For its part, Viva Connections is one of the four main modules of the company's employee experience platform, Viva. The Connections module's main focus is on employee communications.

Any Microsoft conference wouldn’t be complete without news about Azure ‚ and this year’s Build was no different. Given the growing interest in AI in the workplace, two updates are particularly interesting.

The first is the preview release of Azure OpenAI Service, the latest Azure Cognitive Service to be unveiled. Those who have signed up to it will gain access to different models from OpenAI, including the GPT-3 base series, Codex series and embedding models, all girded with the enterprise capabilities of Azure.

Generative Pre-trained Transformer 3 (GPT-3) is a language model that uses deep learning to produce human-like text, while Codex series is a set of models that can understand and generate code, including translating natural language to code.

According to Microsoft, the new OpenAI Service will offer users new reasoning and comprehension capabilities for building new apps for use cases such as writing assistance, code generation and making sense of unstructured data.

The other announcement we noticed was Azure Cognitive Service for Language, which gives users a new tool to produce summaries of documents and conversations. The new capability can help developers surface key information in documents and contact center calls, such as the reason for the call and resolution.

It’s not the only AI news from Build this year either. Microsoft also announced it is expanding its partnership with Meta. The latter has selected Azure as "a strategic cloud provider" to accelerate its own AI research and development. The deal will see Meta deploy machine-learning workloads on thousands of Nvidia GPUs running in Azure. The partnership will also see Microsoft and Meta collaborate on scaling PyTorch adoption on Azure.

PyTorch is an open source machine learning framework based on the Torch library, used for applications such as computer vision and natural language processing, primarily developed by Meta AI.

5. Power Pages Gets a Revamp

Power Pages previously existed as a component within Power Apps called Power Apps portals, but it’s been broken out and redesigned with a new user experience and new capabilities, including:

All of these tools are currently in preview.