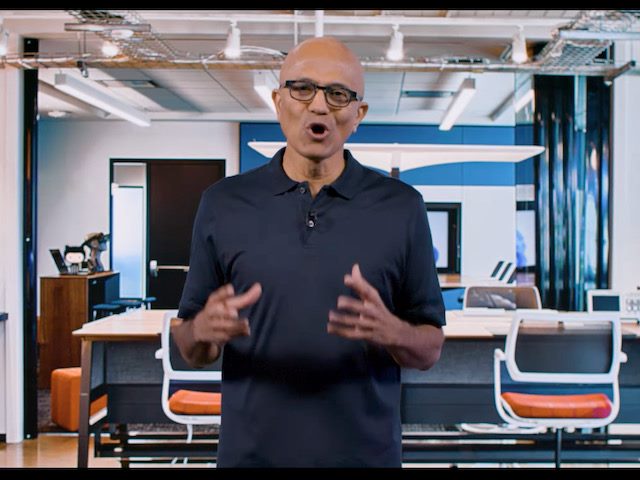 Microsoft Ignite 2022: Teams Premium on the Way, Places in Preview and More

Microsoft CEO Satya Nadella's keynotes at the company's annual Ignite conference have become a bellwether of the company's future direction, as analysts and business leaders parse through his words for insights into future strategies as well as hints at new products and possible course corrections.

Think of Nadella’s "mobile first, cloud first" vision, which realigned Microsoft for a new era. It soon after evolved into the "intelligent cloud" mantra, which has taken the company forward until now.

While there were no rallying cries from Nadella this year, Microsoft’s strategy remains focused on the intelligent cloud and on workplace technologies to enable established and emerging work models.

"Over the past few years, we‘ve talked extensively about digital transformation. But today, we need to deliver on the digital imperative for every organization," Nadella said. "And it all comes down to how we can help you do this with the Microsoft Cloud. No other cloud offers the best-of-category products and the best-of suite-solutions .… It all starts at the infrastructure layer and how we are helping you build agility and optimize your business with Azure."

So, cloud and intelligent cloud it is. But what does that mean? For the workplace, a number of announcements stood out.

A Glimpse of Teams Premium

The development of Teams has become the product to watch for those involved in the digital workplace. While Ignite didn't reveal any big announcements in this area, the platform did get some attention.

For that kind of money, though, you would expect a lot more than the traditional Teams plans. And from what Microsoft stated at the event, it looks like a number of improvements are on the way.

Nicole Herskowitz, vice president, Microsoft Teams, said Premium will be particularly attractive to enterprises that spend a lot of time in meetings, both virtual and physical. In a post about the upgrade, she writes: "Built on the familiar, all-in-one collaboration experience of Microsoft Teams, this new offering makes every meeting from one-on-ones to large meetings, to virtual appointments to webinars more personalized, intelligent, and secure."

Teams’ Premium features are expected to start rolling out in December in preview and then general availability in February 2023. The new features to justify the $10/user price will also not be available until next year.

Those features have an underlying foundation of AI and are expected to make meetings more effective. Take as an example, intelligent recap in Teams Premium. With this, Herskowitz explained, you get the power of AI to make the meetings you attend more productive and impactful. Intelligent recap uses AI to suggest action items and owners, to avoid missing any follow-ups.

After the meeting, intelligent recap will create recordings with automatically generated chapters and insights to highlight important moments in the meeting, such as when your name was mentioned, when a screen was shared or when you left a meeting early, all of which are designed to help you catch up quickly.

Other useful additions include:

Premium will also advance security in Teams, which underlines its growing importance. Customers with the Premium feature will be offered advanced meetings protection that includes meeting options like watermarking to deter leaks and limiting who can record. Additional protections can keep the discussion private.

Before leaving Teams, one other item is worth mentioning. Hot on the heels of the Meta and Microsoft metaverse partnership announcement, Microsoft announced that Teams Mesh avatars will be available for use in regular Teams meetings. Mesh avatars in Teams are Microsoft’s answer to Meta's Horizon Worlds platform and are now available in private preview.

Microsoft Teams Avatars will allow people to create three customized, animated versions of themselves, which they can use when they do not want to turn on their cameras for virtual meetings, wrote Avery Salumbides, product marketing manager with Microsoft. Salumbides called this one of Microsoft’s first steps to enabling metaverse experiences for customers.

Citing research carried in the Work Trend Index earlier this year, she noted that 50% of Gen Z and millennials expect to do some of their work in the metaverse in the next two years and not everyone wants to be on camera.

The importance of enabling work in the metaverse was underlined at Meta Connect earlier this week, when Meta CEO Mark Zuckerberg unveiled Meta Quest Pro, the first in a new line of headsets aimed at the workplace.

The new headsets, according to Meta, will enable users to connect with Microsoft Teams from inside Meta Horizon Workrooms. The development of Teams avatars will make it a lot easier to work in this way.

While Stream and SharePoint have both been available through Microsoft 365 plans, the two were never fully integrated even though Microsoft had announced some years ago it would replatform Stream into SharePoint.

That process involved a step-by-step progression that has taken some time to achieve. Describing the integration as a milestone, Paul Diamond noted that Stream (on SharePoint) will soon replace Stream (Classic). Unlike Stream (Classic), he wrote, which functioned as a portal and a single point of video discovery, Stream (on SharePoint) is now deeply integrated with Microsoft 365.

According to Microsoft, Places will offer insights into who is at the office, where people are sitting, what meetings are taking place and offers ways to book meeting spaces for the days teams are planning to come into the office. It will also give managers insights into how people use the office and whether they need the physical office space they have.

Jared Spataro, corporate vice president for Microsoft 365, said the whole idea is to make office spaces a key element of work. "Overwhelmingly, people come into the office for each other," he explained in a blog. "That is why we are creating a new Connected Workplace category and introducing Microsoft Places to address the unique challenges of hybrid work. People are what give a space meaning and identity. People make a space, a place."

One final note from Ignite is Microsoft Office is to become Microsoft 365 in a major brand overhaul.

The Microsoft Office collection of apps are not going away, but the first big brand change for the product in 30 years sees Microsoft 365 take the center stage. This means that Word, Excel, PowerPoint, Outlook, Teams, OneDrive, will move into Microsoft 365 app as of November, the company stated in a note about the rebranding. "In the coming months, Office.com, the Office mobile app, and the Office app for Windows will become the Microsoft 365 app, with a new icon, a new look, and even more features," Microsoft noted in a FAQ about the change.

The Office.com changes will come into play in November, while the Windows and mobile Office apps will change in January. Microsoft will also continue to sell individual Office 365 subscriptions and one-time purchases of the individual apps. More on this when it happens.

We'll catch up on other announcements out of Ignite, notably Microsoft Syntex, later in the week.