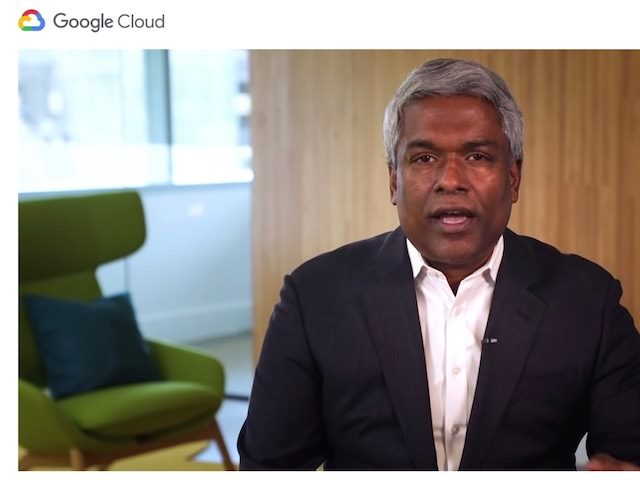 Google kicked off its Google Cloud Next OnAir event on July 14, the first in a nine-week online series serving as its annual customer conference in light of COVID-19.

The health crisis has prompted dramatic changes in every industry and every company, including Google Cloud. All eyes are on the company as the current bronze medallist in the cloud computing race, to see what it will do to close the gap on AWS and Microsoft. Backed by some important strategic shifts since CEO Thomas Kurian took the helm in January 2019, a more attentive Google Cloud is emerging with a nuanced and differentiated strategy. This is befitting of a strong challenger, but most of all, it matches the changing market requirements of a post-pandemic world.

Let's look at some of the leading themes and announcements in Kurian’s opening keynote and assess what they mean for Google’s long-term position in the cloud market.

A lot has happened since we last examined Google’s Cloud’s strategy (see: Google Cloud CEO Kurian Reveals New Directions at Next '19) and the hyperscaler has had a solid start to 2020. Although it is set to report its second quarter results at the end of the month, parent company Alphabet reported the business achieved revenue of $2.8 billion in the first quarter of 2020, an increase of 52% annually. This gives Google Cloud a yearly run rate of over $10 billion, roughly a quarter of the annual revenue of Amazon Web Services (AWS). The growth highlights the role the company played in helping customers respond to the pandemic, whether by supporting remote work through G Suite, which now has 6 million customers, or by accelerating digital transformation by equipping more than 750,000 developers with its cloud platform, data and artificial intelligence tools.

In his keynote presentation, Kurian framed this progress as validation of the company's mission to accelerate every organization's ability to digitally transform and reimagine their business through data-powered innovation. He outlined the three elements underpinning the firm's strategy: its provision of distributed infrastructure-as-a-service through Google Cloud Platform; a digital transformation framework enabled by offerings such as the Anthos hybrid multi-cloud solution and G Suite; and products for specific industries including retail, financial services and healthcare (see image below). 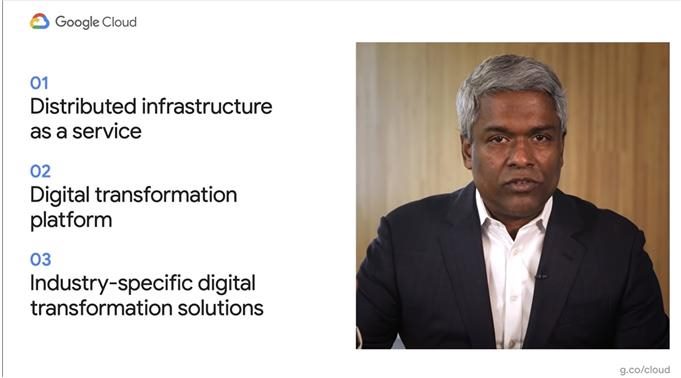 The emphasis on industries is especially important. We believe 2021 will be the year of vertical clouds as the hyperscalers make themselves more relevant to entire industries forced to transform as a result of the pandemic. Google joins the likes of IBM and to an extent AWS and Microsoft, as an early mover with its stated intent in this direction.

One of the most important industries to watch in this regard is telecommunications, where Google Cloud is stepping up its efforts following moves such as Anthos for Telecom and the articulation of its mobile edge strategy earlier in 2020. Ahead of Next OnAir, the company announced a win for its Contact Center AI service with Verizon, which had been a long-standing customer of AWS. The win signals Google's focus on vertical markets is beginning to pay off with more upside to come as the telecom industry reshapes around cloud and 5G transformation.

The first keynote theme tackled by Kurian was arguably its most important: security and trust, an area in which Google Cloud has been investing heavily over the past several years.

As part of this, the company announced Confidential Computing, which enables the encryption of data while it is being processed, extending its encryption capabilities from data in motion and at rest. It also announced Assured Workloads and Assured Workloads for Government, which help automate compliance and ensure applications are configured to adhere to specific regulations such as those mandated by the US Department of Defense and the FBI Criminal Justice Information Services Division, and the Federal Risk and Authorization Management Program (FedRAMP).

These are important steps on a long road to improve Google Cloud's security story, an essential part of building increased trust among governments and enterprises. We believe the depth of security solutions on offer is intrinsically linked with the trust customers have in a cloud provider. This is particularly important for Google Cloud as antitrust lawsuits against its parent Alphabet continue to escalate globally.

The firm must continue to bang the drum on its approach to privacy, and prioritize communications and investments in security overall. One of the enduring features of the pandemic is the elevated importance customers now place on their trust in their cloud provider. Google's investments and, more importantly, its increasingly transparent processes, are vital to help address this and the mixed reactions to Google Cloud that have been provoked by the challenges facing its consumer business.

Related Article: Data Security in a COVID-19 World: What Do You Do When You Are Pushed Into the Cloud

Another strategic area is Anthos, Google Cloud's managed application platform for the delivery of cloud services across hybrid and multi-cloud environments, which launched at Next '19. The latest updates saw Anthos extending support to "bare metal" hybrid environments, at the edge and across other cloud platforms. These platforms now include Microsoft Azure in preview, adding to support for AWS at launch. Additionally, Anthos Service Mesh, due in the coming months, will allow for greater levels of consistency for apps running virtually by managing security and policy.

Anthos's progress has been rapid over the past year. At launch, the platform was mainly focussed on large-scale container-based development in Kubernetes on different infrastructure environments, most notably on-premises and in AWS. Since then, it has added bare-metal support for inside data centres, virtual machines, container clusters and multi-cloud orchestration, as well as new governance and security features. The additions make Anthos more attractive for the thousands of customers who want depth in cloud services, but do not want to be locked into a single cloud environment.

We are now seeing next-level cloud services coming into the platform as well. These bolster Google Cloud's multi-cloud vision and give it unique grounds for differentiation in areas such as edge and 5G solutions, as well as data analytics with the arrival of Big Query Omni.

The unveiling of Big Query Omni in private alpha was arguably the most eye-catching news from the keynote. Big Data Query is a new multi-cloud analytics solution powered by Anthos. With it, users can query data in multiple cloud and data center environments, including in AWS S3, and soon Azure, without having to move data to Google Cloud and without leaving the Big Query interface. It is designed to address the friction and cost in moving data from other cloud providers to Google Cloud or in working on data stored with various cloud providers.

The pandemic has elevated the importance of data as the foundation of enterprise survival and growth, and Google Cloud has made significant progress in this area, building on its Looker and AppSheet acquisitions as well as its Apigee platform.

In building what is in effect a hybrid multi-cloud data architecture, Google is really starting to differentiate its cloud strategy. The company under Kurian is orienting around rapidly expanding hybrid multi-cloud services. Big Query Omni also provides a basis for its machine learning tools, which are likely to follow the same hybrid multi-cloud trajectory. Extending Google's AI across clouds is a trend we expect to see in future Next OnAir sessions, and with customers over the coming year.

While the market is early in its transition, care must be taken not to add complexity for customers and developers already struggling with cloud computing. Although Google's multi-cloud and data strategy is accelerating rapidly, it has competition. Microsoft’s Azure Arc is a similar solution and the move will expose it to other players such as Cloudera and IBM RedHat, for example.

A New Vision for G Suite

The day after Next OnAir opened, Google Cloud revealed its new vision for G Suite. The news was originally scheduled for this week's session on productivity and collaboration but was moved forward as a result of media leaks.

Launched as a “new home for work,” an integrated workspace in G Suite brings together email, chat, voice and video calling, document collaboration and task management into a single, unified experience designed to reduce the switching between different collaborative features and applications that had been a criticism of G Suite in the past.

Google has been ramping up investment in its collaboration tools over the past year, including announcing in April that it would make Meet free for everyone (see: Google Makes Meet Free for All ). In recent weeks it has unveiled updates such as the integration of Meet and Chat features in the Gmail web interface.

G Suite played a central role in helping organizations shift to remote work during the COVID-19 pandemic, and is playing a more strategic role in the broader Google Cloud portfolio as a result. We will be tracking its progress in the coming months and expect to see many more updates in this area as it seeks to accelerate its challenge to Microsoft in the collaboration and productivity arena.

The Next OnAir event coincides with a critical moment in Google Cloud's history. The company faces mounting pressure to show progress in the enterprise market following significant investments in infrastructure, sales personnel, acquisitions and market education. The health crisis has prompted a dramatic acceleration in cloud services and digital working, and companies are emerging from the pandemic with more clarity and purpose in their digital transformation projects.

In this regard, Google Cloud is prioritizing the right things: security and trust, a greater transparency in its operations, remote collaboration, hybrid and multi-cloud flexibility, industry specialism and, above all, innovation that delivers rapid business and societal value.

Put simply, if AWS aims primarily at being the developers' cloud and Microsoft the trusted cloud, Google is arguably emerging as the innovators' cloud. Backed by some gutsy moves by its CEO, it is responding to changing customer requirements with a more nuanced, considered and differentiated strategy that is ultimately friendlier to the enterprise and befitting of a strong market challenger.

Kurian ended his session claiming he is hopeful about reimagining business as we recover from the pandemic. There is still a lot to play for in the cloud computing race, and the big hope for Google Cloud is whether this approach will put a meaningful dent in the market share of its rivals in 2020 and beyond.

It may just do so.