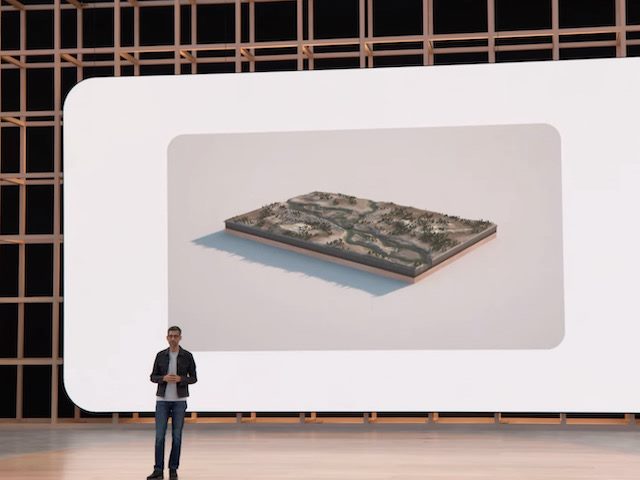 While Google’s I/O developer conference isn't exclusively dedicated to the digital workplace, there are enough announcements on workplace technologies to make it worthwhile taking a deeper dive, so that will be the focus of our news wrap up this week.

Google made a number announcements this year which look liked interesting additions to any organization operating in Google environments, particularly for those operating in a hybrid environment. So with no further ado, five workplace-related announcements coming out of Google I/O which span from the practical to the aspirational.

One of the nods to the more flexible, asynchronous way people are now working is the extension of its auto-generated summaries to Workspace 'Spaces,' Google's chat app for discussions and file sharing.

Like many of the announcements this year, Summaries cater particularly to those working in hybrid teams who may have missed something when they are offsite or offline. Google first introduced Summaries to Google Docs in February.

At the time, Google explained summaries as a means to automatically distill the contents of a longer document into a brief synopsis — a digital workplace Cliff Notes, if you will.

With its entry into Spaces, the feature will select and highlight the most valuable information from a chat and allow users to jump to the most relevant content in the chat history, in theory allowing them to catch up much faster than parsing through a long exchange.

Summaries are expected for the Business, Enterprise, Education, Essentials and Frontline editions in the coming months. Google also plans to bring transcriptions to Google Meet later this year. Transcription summaries are not expected until 2023.

All of this of is driven by Google’s ongoing work on machine learning and artificial intelligence. Google’s work with AI has had its fair share of problems, although they are ones shared across the industry. Issues with AI language models for example, have resulted in gender and racial biases and at times inaccurate or specious conclusions. Google is attempting to address these problems in part by opening up its work in AI to select researchers for testing through its new AI Test Kitchen.

AI Test Kitchen is an app where a select few can experience and give feedback on some of Google's latest AI technologies. The company has not finalized who will be able to access the app, but suggest it will be an invitation-only program. According to Google its aim is to improve Google’s development of AI.

Although Google may be slowing down on its AI language models, it also still sees AI as a solution to some of the common problems found in hybrid working in general, and video conferencing in particular. Molly McHugh-Johnson listed a number of upcoming Workspace features in an official Google blog, which were first announced at I/O:

Another feature which built on the momentum of a previous announcement was "Multisearch Near Me." Google first introduced multisearch in April.

According to Google, the extension of this feature will allow people to combine either a picture or a screenshot with the text “near me” to receive results for local retailers or restaurants that would have the apparel, home goods or other objects you might be interested in. Multisearch Near Me is expected later this year.

The company also announced an in the works development for multisearch that gives a nod to AR. The forthcoming feature will enable search across multiple objects.

The current visual search in Google can recognize objects captured in a single frame. In the future, with an advancement called “scene exploration,” you will be able to use multisearch to pan the camera to glean insights about multiple objects in a wider view.

Reports have been circulating over the past few months that Google was developing AR glasses, but nothing was confirmed — until the I/O conference. The prototype glasses were revealed in a promotional video during Alphabet CEO Sundar Pichai's keynote speech. Pichai told the audience this was only a sneak peek of what's to come.

"Language is so fundamental to connecting with one another. Yet, understanding someone who speaks a different language or trying to follow a conversation if you are deaf or hard of hearing can be a challenge," Pichai told the audience.

The video demonstrated practical use cases where AR glasses might help people in the workplace as well as at home, a considerable contrast to Google's first foray into glasses, Google Glass, which stoked concerns about privacy while failing to address similar practical scenarios to these. Google Glass did have the dubious honor of inspiring a new insult – the Glasshole.

As inspiring as the video is, however, Google is making no promises that such a product will actually come to market. It may be that the video and announcement at I/O was testing the waters to gauge people's reactions. We will find out soon enough, though, as Google was one of the first players in the VR space and is unlikely to let itself be bypassed by any of new or established entrants in the space.

Finally, as part of its ongoing revision to its data policies, Google announced two features that aim to give users more control over their personal information.

In the coming months, Google said it will make it easier for people to request the removal of search results that contain personal information. Google SVP Core Jen Fitzpatrick wrote about two new tools that will give users more control over their data.

The company made a number of other security upgrades and releases, but in terms of protecting personal data these two stood out.