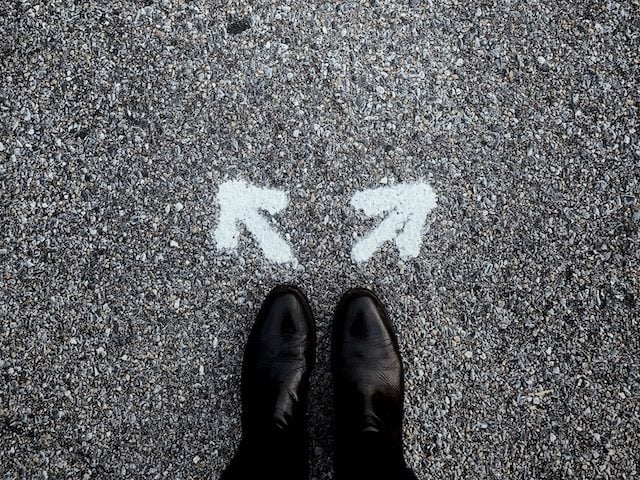 Did Leaders’ Decision-Making Improve During Lockdown?

As the world navigates its way back to the office, or at least to some form of hybrid working, opinions are polarized. Some CEOs want all staff back in the office. Others suggest rushing back to the office is a big mistake. Arguments abound about company culture, onboarding, employee experience, productivity — but little is said about one of the most important aspects of our work: making judgments and decisions.

How are organizational leaders making the decision about the future of their workplaces? Are they systematically exploring the data on how their organizations behaved and performed over the last 18 months? Or are they simply pining for a time when their physical presence ensured a compliance to the decision-making hierarchies they led?

When it comes to the study of decision-making, and in particular human biases in decision-making, the name of Nobel Laureate Daniel Kahneman looms large. His work with Amos Tversky requires a big dose of humility when you start reading it, as you tick off each bias they identified as ones you are likely guilty of. For example, their "availability" heuristic claims we are biased towards data that is most available, which often means most recently heard. For instance, if you are planning a trip and debating whether to drive or fly — if you read a news report on a serious plane crash, what decision do you think you'll make? Would it have considered the relative safety records of flying versus driving?

Kahneman’s latest book, "Noise: A Flaw in Human Judgment" brings more bad news when it comes to decision-making. As well as the now well-documented human biases, "system noise" can create as much, if not more errors in our decision-making. For example, forecasting the impact of a new virus outbreak is a “noisy” decision environment. Even if medical experts were perfectly unbiased their forecasts could, and do, wildly differ.

While specific to a situation, Kahneman’s advice in combating both human bias as well as system noise has a theme around systematic and statistical thinking. To combat our biases, it’s important to reserve judgment until we have objectively collected, and independently assessed, supporting data.

Think about how we made decisions when we were office-bound. Senior executives and middle management were often colocated in "executive alleys." It wouldn't be surprising if the convenience of both formal and ad hoc executive huddles formed the practice for key decision making. Kahneman warns against this, suggesting that "social influences can produce a kind of herding that undermines the wisdom of crowds." He also identifies something that all of us have likely witnessed in meetings with leaders that "if one or two advocates speak first, they might well shift the entire room in their preferred direction."

How Did Remote Working Affect Our Decision-Making Protocols?

While it’s hard to be definitive, we at SWOOP Analytics believe the following data suggests decision-making was different during the COVID-19 lockdown. Our recent benchmarking study of nearly 100,000 digital teams across 33 organizations firstly identified the vast majority of staff only attended on average one meeting every two days. This number is likely much lower than when they were in the office. With less opportunity to be socially influenced by their peers and managers in meetings, perhaps staff were spending more time thoroughly researching decisions while communicating asynchronously? 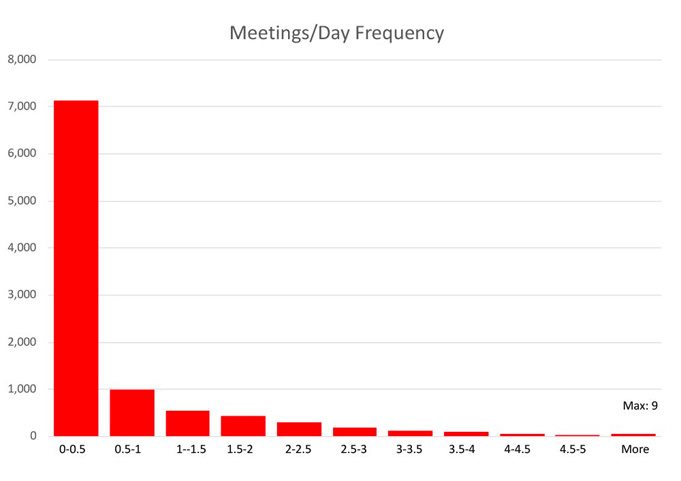 This histogram shows the digital meeting habits of some 12,000 employees across multiple organizations over a three-month period during the lockdown period.

We have developed algorithms to characterize the types of digital teams being formed, based on the team sizes and patterns of interactions. The aspirational form was identified as the “self-directed” team, which is a team with no identified single leader and where team members are connected in two-way relationships. These algorithms were initially applied to digital teams in 2019 before the pandemic lockdown. They were then similarly applied to some 27,000 digital teams during the lockdown period. 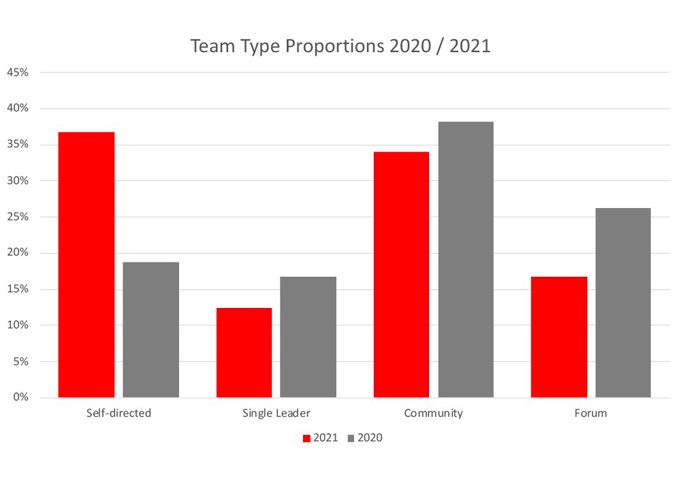 The comparison chart shows the proportion of self-directed teams escalated during lockdown to nearly 40% from a pre-lockdown proportion of less than 20%. While both samples were for digital teams only, one was when staff was also working from offices, whereas the other they mostly weren’t.

One could reasonably infer that with more self-directed teams spending less time in meetings yet engaging in much higher levels of one-one-one chat messaging that people practiced higher levels of what Kahneman calls "decision hygiene" than prior to the lockdown.

Kahneman does not suggest we should avoid meeting and making decisions communally. He suggests, for important decisions, one should defer calling together the key decision-makers until appropriate pre-work is concluded (e.g. breaking complex decisions into sub-parts; conducting individual independent data gathering and assessment; gathering baseline data from comparable prior decisions, etc.). Therefore when it's time to decide, key decision-makers have been independently informed in advance and not influenced or biased by social influences too early in the process.

What Can Leaders Do as They Navigate a New Working Norm?

As we start returning to the office, it’s important not to lose the gains we may have made in our decision-making processes. We will frame our suggestions in the context of a decision all organizations are facing at the moment: "What policies should we put in place for a hybrid way of working?"

During our benchmarking study one CEO commented, "I was used to firing off requests to my staff and got annoyed when they didn’t respond immediately. When I was forced to communicate with them via digital threaded discussions, I not only found that my requests were better formed and reasoned, but my staff also responded better and faster.”

This is emblematic of what the lockdown has taught us.