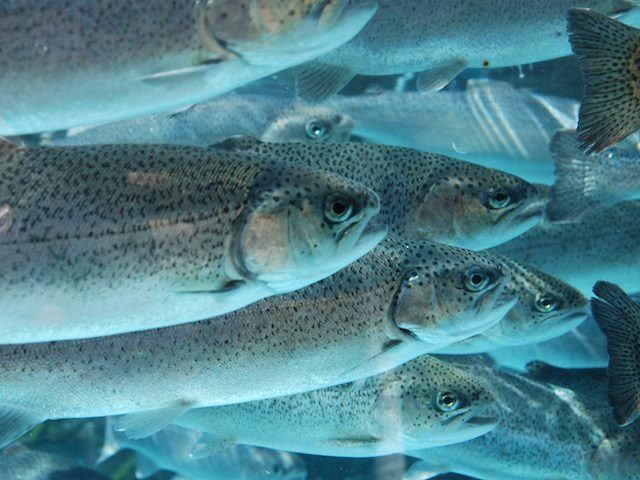 The Trout Stack or: Why 'Why' Is the Key to Transformational Leadership

Want to get a sense of your own intellectual limitations? Take a walk in the woods with a four-year-old. It’s a place full of wonders, and every time they open their mouth, a single, painful word emerges: Why? Why is the sky blue? Why do leaves change color? Why do mushrooms smell that way? Why can snow fleas live in the deep cold of winter?

The Adverbs of Leadership

Businesses of all sizes operate at four distinct functionality tiers, as shown in Figure 1, below. At the bottom is the operational layer, often described as the 'table stakes' or 'keep the lights on' layer. This is where the individual real-time functions of the business happen: pay the bills, run backups, update software. At this tier the business concerns itself with who will perform the tasks, and when the tasks will be performed. 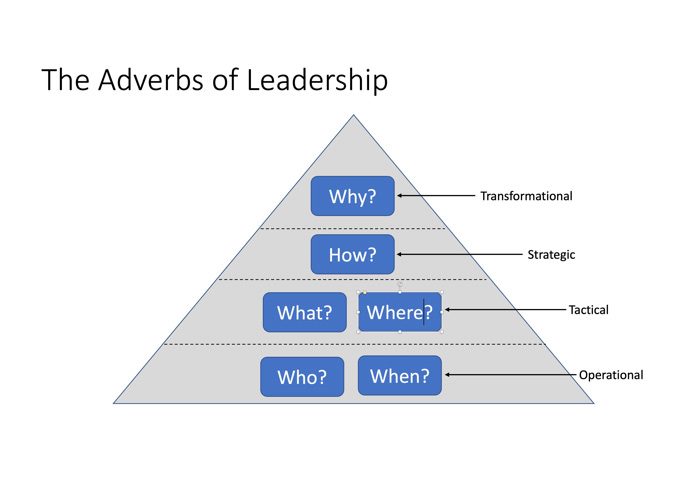 Next is the tactical layer, the hands-on layer where the work of the business is conducted: Staff the data center 24/7, manage customers in the contact center, perform sales and marketing. Here, the key question is what: What must we do to keep the lights on and customers happy? Where should these tasks be performed? This layer became highly visible during the early days of COVID when the virtualization of the workplace became a front-and-center consideration for ongoing operations.

Next is the strategic layer, where the methods and techniques required to achieve future goals are formulated: How we will achieve a superior competitive position? How we will grow market share? How we will drive our costs down? How we will take better advantage of technology to differentiate ourselves as the signal that rises above the competitive noise? This layer tends to emit a compelling siren song that seduces executives into executing too early in the process, a mistake that can be perilous.

The final layer, and the least talked about, is the transformational layer. It is here where the inherent values of the organization kick in to help leadership define what that desired future truly looks like. But even more important, it provides leadership with the tools they need to clearly state why the future they seek is — well, the future they seek. It is here that we focus our attention on a different term: Why.

The study of this tiered functionality is a study of adverbs. There are six adverbs in English (and most other languages, as well): who, what, when, where, why and how. They are clustered in each of the four layers, as Figure 1 shows. Who and when live in the operational layer; what and where, in the tactical layer; how, in the strategic layer; and why, at the top, in the transformational layer. They function only in their specifically assigned layers. If they show up elsewhere, warning bells should sound. For example, if participants at a corporate strategy session begin to discuss the details of who should do certain things, beware: the conversation has strayed from the strategic focus it was meant to have. The alarm should be recognized as a trigger for the group to get back into strategic territory, where 'how' is the operative adverb.

A Hover of Trout

Collective nouns are terms that define multiples of things: a parliament of owls; a murder of crows; a crash of rhinoceros; an exaltation of larks; a hover of trout (for the writers in the audience, a worship of readers). Anyone who has ever observed a hover of trout in a lake or stream knows that they really do hover, facing into the current with their mouths slightly agape so that the oxygen-bearing water bathes their gills, allowing them to breathe. It is this behavior that earned the ‘Trout Stack’ its name — more on that shortly.

I recently conducted a leadership workshop for a telecom client’s executive team. They were contemplating a radical redesign of their managed services product set, but were stuck in an intellectual quagmire of tactical thinking. They knew in their hearts that it was imperative they ask more strategic questions, but the allure of the action-oriented tactical stage was too attractive. The conversation swirled, occasionally bumping against the interface with the how-centric strategy layer. So, I spoke up.

“You seem to be stuck,” I began. “The strategy is important, but you’ll never define it the way you’re going.”

I turned to Alex, the chief strategy officer, who was the most vocal person about the need to transform the business.

“You’re spending time as a group trying to figure out how you’ll succeed with this proposed transformation,” I said, “but I haven’t heard a single one of you ask ‘why.’ Why do you want to do this?”

No one answered, so I told Alex that we were stepping into the Trout Stack.

“The what?” He looked bewildered.

He agreed, a bit befuddled, and I began to pepper him with questions.

Q: Why do you want to offer Security-as-a-Service?

A: Because it makes sense.

A: Because the old way of doing security is outmoded.

A: Because everybody is moving to the cloud.

A: (Starting to get annoyed) Because it’s a better model of service delivery.

A: Because it shifts the customer’s spend from CAPEX to OPEX.

A: Because they no longer have to buy firewalls or security servers.

A: Because they’re now in our data center.

A: Because we can amortize the cost of world class security across a huge number of customers, which saves the customer the cost of all that hardware, software, people, and training.

A: (Now getting really annoyed) Because we can cost-effectively acquire, operate, manage and support a huge base of multiservice hardware and software in our data center that provides services to many different clients simultaneously, which gives us a competitive edge.

We continued like this for several more rounds until we reached an impasse.

A: Because all the customer has to do is wait for the vendors to duke it out with each other, and whoever survives by offering the lowest price wins. But they don’t win — they lose. WE lose. We can’t do business that way. We have to offer something more than just infrastructure. 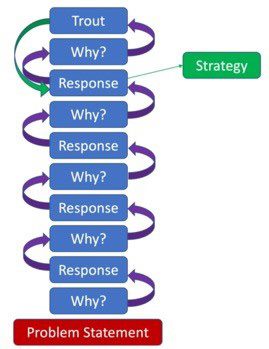 At this point, Alex’s mouth was moving, like a trout, but no sound emerged. He had reached the top of the Trout Stack.

I asked him to go back to the very last answer he gave — in other words, go back down one level in the stack.

"Whenever we get into a battle where price is the differentiator, we lose,” he said. "This is classic Red Ocean stuff. All the customer has to do is wait for us and the other vendors to duke it out, and whichever one of us survives — which happens because we offer the lowest price — we win. But we DON’T win — we lose. We can’t do business that way. We have to offer something more than just infrastructure."

He looked at me, bewildered.

“Congratulations,” I told him. "THAT is your strategy.”

“Your strategy — the process that dictates how you will win — is captured in the last question you were able to answer (see Figure 2). As soon as I saw your mouth moving like a trout’s, I knew that we had reached the top of the stack and could move on to the business of building strategy.”

Related Article: Innovation Can Be Taught. And Measured

Why the Trout Stack Works 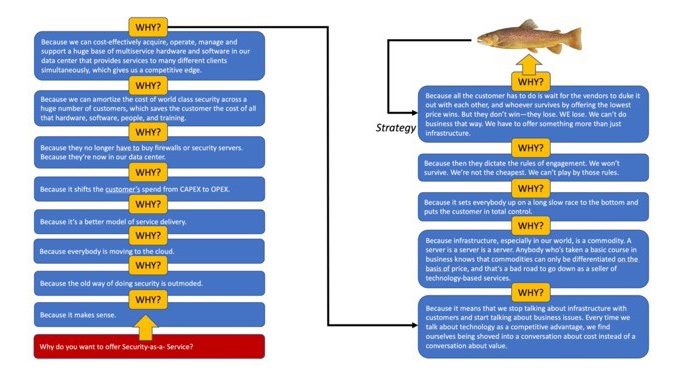 As soon as he got away from thinking about how his company was going to succeed and started thinking about why the firm had to do something beyond their core business to do so, the conversation became transformational, which made strategy creation — how we must engage if we’re going to offer more than infrastructure — straightforward and outcome-based.

Company leaders get paid to do one thing and one thing only: Transform the business. From a change perspective, the nature of that organizational transformation—grow, shrink, diversify, consolidate, change OPEX or CAPEX posture, realign to a different market — is immaterial. It is, however, fraught with risk. Most business leaders are action-biased, which means their desire to get on with the transformation they wish to drive can overwhelm the need to proceed with a degree of caution. If the 'how' runs roughshod over the 'why,' leadership is abdicated, transformation becomes elusive, and instead of moving up the value chain, the process moves downward, toward the tactical. This is one reason we often say that there is no such thing as a strategic plan — it’s an oxymoron. There is a strategy, and there is a tactical plan based on that strategy, but they are not the same. If the transformational question, why, kicks off the conversation, and is then allowed to lead to the strategic question, how, then the organization’s values-based vision guide the entire endeavor — that’s the nature of why. From that point, it’s easy to move into a how-based strategy session, which can then lead to tactical plans for execution.

The alternative? Allow the 'how' to lead the foray. This rarely works. ‘Even a blind squirrel finds an acorn every now and again’ is no way to run a business.

Ultimately, Alex’s company elected to create an internal professional services arm that provides security assessment and consulting services to customers to help them assess their cybersecurity threat profile. This decision satisfied the Trout Stack exercise’s conclusion that the company needed to provide more than infrastructure if it wanted to differentiate from all the competitive noise. So far, it has served them well.

And for anyone wondering, it’s a scurry of squirrels.