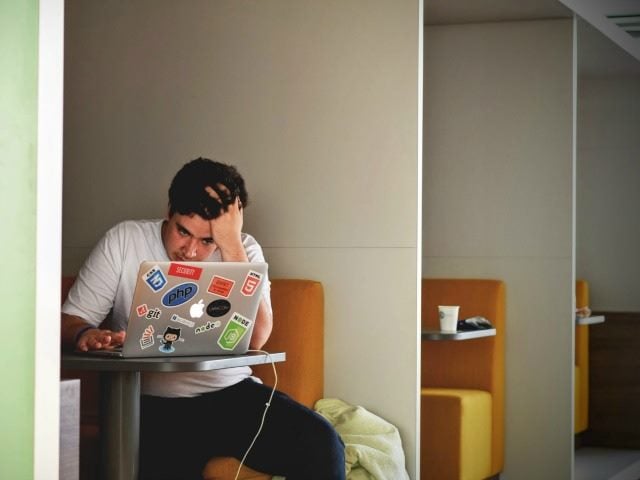 Most of Us Aren't in Too Many Virtual Meetings

“Meetings are Eating the World.” “Do you spend 30% of your week in meetings? Survey says many people do.” “Stop the Meeting Madness.” These are just a small sample of a proliferation of articles on meetings overload. They variously claim we spend 10 hours a week, four to 12 hours a week or 23 hours a week in meetings. During the height of the pandemic, these were exclusively virtual meetings. The survey samples ranged from 500 knowledge workers to up to 2,800 professional workers.

At my firm, SWOOP Analytics, we collect insights by passively analyzing data on what people are actually doing, more so than what they think they are doing. Unlike surveys, which aim to collect a representative sample of respondents, we aim to analyze the total population of organizations. One measure we track in benchmarking Microsoft Teams activity is audio time: the total audio time (minutes) that the user participated in calls or meetings during a specified time period. Audio time therefore includes not only meetings, but one-on-one calls (i.e., any synchronous activity). Our sample included some 45,000 staff across nine organizations: 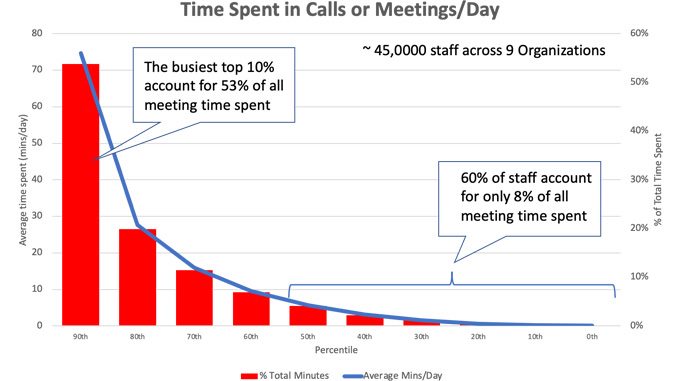 Our results, when all members of an organization are included in the analysis, is an average of around three hours per week in synchronous activity (a call or an online meeting). Those in the top 10% of meeting attendees averaged just over six hours per week. These results suggest the time spent in calls and meetings is significantly less than the results being reported through surveys.

Why Such a Discrepancy in Time in Meeting Survey Results?

I have no concerns about the efficacy of these surveys or even their wise counsel — we just use a different sampling approach. We have been careful to ensure our own sampling is not biased, say by including inactive accounts. We have only included people who have recorded at least some audio minutes in Microsoft Teams. Audio minutes also counts one-on-one calls, or what Microsoft calls “ad-hoc meetings,” which typically aren’t reflected in calendar data. We are also mindful that not all recording methods are perfect, and perhaps how Microsoft records audio minutes may potentially miss some activity. Our investigations have uncovered more concerns about “over-reporting” and none about “under-reporting.” Two of the three survey studies identified were held during the pandemic and were surveys for virtual meetings only, so the comparison is not impacted by under-reporting, due to missing face-to-face meetings.

It is worth investigating why our results differ so much, and more importantly, what critical insights we might be missing out on.

Here are my intuitions:

Despite our findings of lower levels of synchronous calls and meetings activities, we do not believe this invalidates the survey-based results. Surveys are better at eliciting people’s thoughts and feelings than passive studies like ours. If someone reports they are in too many meetings leading to feeling overloaded, this is likely real, even if passive analysis show otherwise. Why this might be so is a topic for a whole new area of investigation. Is it the interruption effect? The stress of pre- or post-meeting commitments? Good topics for another day.

Where Should We Focus Our Change Efforts?

While our data suggests the vast majority of staff are not spending too much time in meetings, it shows some definitely are. And they likely are the most critical people to your organization’s success — your senior executives. Our “busiest” staff member was spending on average, 12 hours a day on synchronous communication activities! The good news for the change-makers in your organizations is they may only have to concentrate their efforts on less than 2% of the staff to have the full effect. We have calculated that even if only the busiest 10% of staff can be convinced to swap one weekly meeting with asynchronous messaging in Teams Channels, the multiplier effect can result in millions of dollars in time savings alone, for even modestly sized organizations. Good analytics can identify this target audience precisely.

What we might be missing by only concentrating our change efforts on the busiest 2% is “what about the other 98%?” Our data shows that 50% of staff spend less than 35 minutes a week in synchronous collaboration (on Microsoft Teams). Note that this excludes staff who have spent no time collaborating synchronously. No doubt for some of this 50% of staff, synchronous collaboration is not a requirement. However, there is also little doubt that a good proportion of these staff would benefit from increasing the number of meeting and/or calls that they participate in. Such insights are missed when we only look to promote meeting management practices that are really only needed by a selected few (as important as they may be).

Our data shows the busiest 10% of people are responsible for 53% of all time spent in meetings and call time. Compare this with another similar distribution you may be familiar with i.e. the wealth distribution in the US, where the wealthiest 10% account for nearly 70% of the country’s total wealth. Would you ever dream of asking those at the bottom end of the remaining 90% to pay more taxes and donate more to charity?

Good workplace analytics is required if you are to better identify where best to deploy your workplace change efforts.