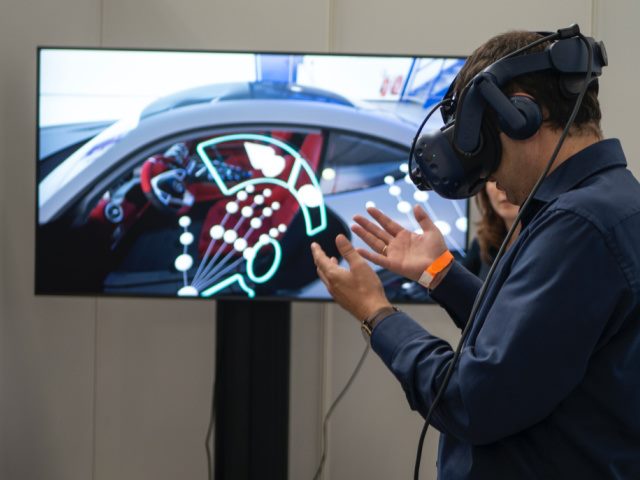 Get Ready for the Metaverse to Go Mainstream

After this weekend, Uncle Ned may have some opinions about the metaverse.

Meta, the company formerly known as Facebook, is spending millions during the Super Bowl on Feb. 13 to advertise the company's Meta Quest 2 virtual reality goggles alongside the company's new metaverse-centric vision.

For the millions of Americans, like our fictional Ned, who don't live their lives on the digital frontier, the metaverse may seem, frankly, a wee bit strange. But while many of the social and commercial aspects remain in the future, other parts of the metaverse aren't so far off thanks to the evolution of VR technology.

In fact, in the digital workplace, the metaverse is already here, and is poised to grow in a number of practical and less fantastical ways.

What Is the Metaverse?

The metaverse, a version of the internet featuring decentralized, persistent 3D virtual environments accessible through VR headsets, augmented reality (AR) glasses, smartphones, PCs and game consoles, is populated with digital avatars that people can use to interact, visit far-flung locations both real and imagined, and buy and sell goods. It is one of several burgeoning technologies, including blockchain, cryptocurrency and non-fungible tokens (NFTs) that underlie Web3, the developing vision of a decentralized internet.

In workplace terms, at least in theory, employees in the metaverse can meet, collaborate, interact with customers, and find, hire and onboard workers, regardless of their physical location. Meta's Super Bowl ad spot is designed to show users what they can do in the metaverse right now, Meta's Chelsey Susin Kantor told industry publication Adweek.

“Over the past few months, you’ve seen Facebook go through a big transition to focus on Meta as the name and the metaverse as the vision," she said. "For Meta Quest, it was important to focus on what’s ready for people today and how people are using it today.”

The nearly 2-minute ad spot features a cast of characters from the real world who gather for a reunion at a restaurant and arcade built in Meta's Horizon Worlds, the company's platform for developing VR environments. Owners of Meta's Quest 2 VR headsets can actually visit the venue when the spot airs.

In case the ad spot didn't get attention, Meta is also sponsoring a post-Super Bowl VR concert with Rock and Roll Hall of Famers Foo Fighters that is free to owners of Quest 2 goggles or to users of Meta's Facebook, Instagram or Messenger services in non-VR.

For some, this virtual metaverse may be a new concept, but it's been around for quite some time in gaming. And with a new generation of gamers growing up on Minecraft, Roblox and Fortnite, it looks set to grow.

VR is particularly well suited to situations when companies can't do face-to-face training because the situation is rare, dangerous, difficult to recreate in the real world, or costly, Belch said.

"A lot of the traditional methods, the information goes in one ear and out the other," he said. "VR is that flight simulator-like experience where an employee can learn by doing."

Despite all that, VR learning has not yet reached maturity, Belch said, noting that nearly all the training content is highly customized and therefore expensive and not scalable. But the value of what is being delivered means it has a place in the enterprise. "It is legitimate learning impact from beginning to middle to end," he said.

Workplace Collaboration and the Metaverse

Tom Wujec put on his first VR headset in 1986, giving him a perspective on the growth of VR and its role in the metaverse that few have. And what he sees from the tech giants pushing the metaverse makes him skeptical. Is it all just hype?

It depends on how you define the metaverse, said Wujec, an author, professor at Singularity University and fellow at design software firm Autodesk. If it's a truly virtual world, as Meta CEO Mark Zuckerberg described it, where you don a VR headset that puts you into a virtual space as an avatar to interact with others, then it's actually kind of ridiculous.

"I think that's kind of ridiculous because you're not actually seeing people," he told Reworked during in an interview at the recent Digital Workplace Experience event. "You're not actually engaging with them. You're adding a layer of artificial intrusion that is quite inauthentic and I think puts more space between different people."

The question comes down to what kinds of jobs you want to get done in the metaverse, he said, adding it can be very useful for a subset of activities.

"Some of the best experiences of the metaverse I've been in are scientific visualizations," Wujec said, pointing to visualizations that go into outer space or down to the molecular level. "There's an incredible depth of immersion and understanding there, and there's no other way to do that other than deep immersion."

Whether or not companies can use VR and the metaverse to collaborate and meet more broadly is another question. Wujec remains a skeptic.

"A blanket solution for creative collaboration and engagement using the metaverse? Not so much," he said. "But for very specific tasks, there are about a dozen companies that are doing a really great job building out a metaverse that are not in the news."

That's not to say that broad collaboration in virtual spaces is a pipe dream. Companies like Microsoft and Google are working to make real-time telepresence and mixed-reality collaboration a real part of how people communicate and collaborate going forward.

Google has been prototyping Project Starline, a photo-realistic video meeting tool that makes it look, sound and feel like the other person is sitting across the table from you, no headset required. Apple reportedly has thousands of employees working on a new mixed reality platform called "realityOS" that will include headsets. But it's Microsoft that appears to be the furthest along in developing a corporate metaverse.

The Redmond, Wash.-based software giant has been showing off its Mesh mixed reality platform and its integration with the company's popular collaboration tool, Microsoft Teams. At the company's November 2021 Ignite event, it revealed Mesh for Microsoft Teams, an app expected to be rolled out in the first half of 2022, that allows people to use Teams in a shared holographic experience to meet, collaborate, teach and troubleshoot.

That mixture of real-time holographic projection with metaverse-like virtual spaces is the result of years of research and development and dovetails with the development of augmented reality. Augmented reality tools such as lightweight glasses and AR-enabled smartphones are already in use, although not at the same level as VR in enterprises.

AR is not used much outside of games like Pokemon Go, Belch said, but the growth potential is there. It won't be too long before we see glasses on faces in the workplace.

"VR is a very appropriate technique for learning before you go do the job," Belch said. "AR, when it becomes more hands free, will become the in-the-flow of work performance improvement tool."

The Future of the Metaverse Is Now

So how far off are we from working in the corporate metaverse? You can tell Uncle Ned it won't be too long.

"We're kind of already there," Belch said. "Look around. Digitization is everywhere. People are practically living in social media. We've got these games like Fortnite. People are buying digital land, cryptocurrencies ... it's kind of crazy."

Meta's massive Super Bowl promotion, alongside the popularization of VR goggles, is one more step along the way to blending the digital and physical worlds at work.

"Because VR is mental transportation, we see VR as the bridge to all of this, as one of the key components and key pillars of bridging where we are today to what the metaverse is going to be," Belch said.