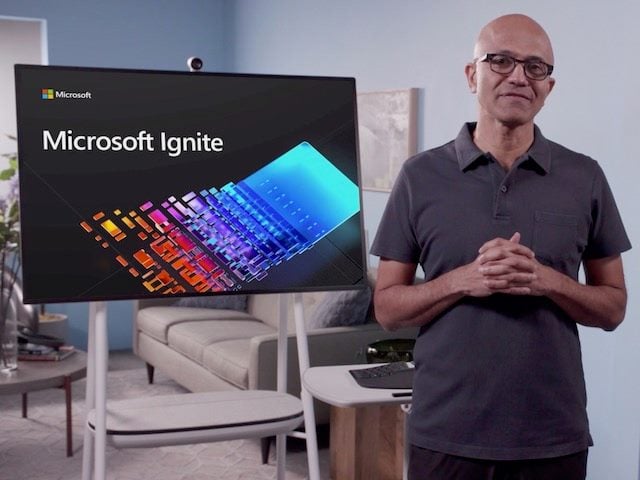 Microsoft has been one of the major forces helping enterprises transform throughout the pandemic and Ignite showed how this trend is benefitting the enormous flywheel of the company's products.

Among an eye-watering number of announcements, the event’s core theme this year focused on business resiliency. While reflecting an important customer priority at the moment, it also highlights the investment Microsoft is making in driving integrations across its cloud businesses.

The strengthening of the connective tissue between Microsoft’s array of products — across Teams, Azure, developer tools, AI and security to name a few — is arguably the biggest takeaway from the event. But it is also one of the firm’s biggest assets in the cloud wars. Let's explore some of the highlights and discuss what they mean for Microsoft and the cloud market moving forward.

Unsurprisingly, many of Ignite’s headlines focused on reimagining teamwork, with a large focus on the meetings capabilities within Teams. Microsoft made a host of improvements including new scenes for Together Mode, custom layouts, breakout rooms and meeting recap features.

But the standout update by far was the emergence of a new area: well-being technology within Teams. It unveiled a new virtual commute feature which schedules time at the start and end of the day for managing task progress and reflection. The company also announced an integration with the Headspace meditation app along with a host of insights for employees and business leaders through the integration of Workplace Analytics.

Concerns are mounting over the mental health and well-being of remote workers, and business leaders are now starting to take the area very seriously, especially as work-from-home strategies become permanent and burnout risks become real. At CCS Insight we have been saying for some time that most collaboration and HR applications will start including features that track and promote well-being as a result, and Microsoft deserves credit for being the first major technology player to take significant steps into this area. Microsoft also shared some of its research which found that a third of remote workers now claim their well-being has been negatively impacted since the pandemic, with average workdays increasing 25% in the US.

Questions remain as to whether these early features will be effective in addressing these growing challenges. But they are a clear indicator of a wave of innovation in the well-being area coming in the next few years, and Microsoft is taking a proactive role in driving this forward. Above all, the new additions show that Teams is moving beyond being just a video and chat solution to become a trusted hub for digital work.

Another important area at the foundation of Microsoft’s flywheel is Azure, which continues to expand. Among the headline announcements in Satya Nadella’s keynote was the launch of Azure Orbital, a groundstation-as-a-service that enables customers to communicate with and control their satellites or spacecraft on a pay-as-you-go basis. While the move follows AWS’s entry into this arena several years ago, the firm showcased early customer National Oceanic and Atmospheric Association (NOAA), which will use Azure Orbital to manage its weather satellites.

Two other areas of progress to note are in hybrid cloud and AI.

Microsoft is right to double-down on hybrid cloud. Over 40% of large firms will maintain at least 40% of their IT workloads on premises over the next few years according to our data and Microsoft’s heritage in this area arguably extends back to 2016 when it was first to market with Azure Stack.

But a crucial component in this picture is extending Arc’s control pane to other clouds as well, an area which will need more focus from Microsoft. While the announcements have added some critical pieces, we expect to see more services highlighted that extend to AWS and GCP environments in future. Forty-six percent of senior leaders in our latest C-Suite IT Investment Survey state they are adopting multi-cloud as a formal part of their cloud computing strategy. Microsoft will also need to extend its Arc umbrella across other data services as well, such as analytics, machine learning and 5G edge computing.

Another important area of investment over the past few years has been in AI, where Microsoft’s strategy got a boost across two important areas: Azure ML and Cognitive Services.

In Azure ML, a new drag-and-drop Designer tool as well as the no-code Automated ML capability (formerly called AutoML) were released. Microsoft is seeing a transition from customers deploying “tens of models to thousands of models” as the market matures. We too are seeing this trend. According to our C-Suite IT Investment Survey, 44% of firms are now in production with machine learning-based applications, up from just over 20% a year ago. The emphasis on helping data scientists build low-code models is particularly timely, as models using time-series data such as for forecasting have become popular as a result of the health crisis.

Microsoft also released Metrics Advisor, a new Azure Cognitive Service which proactively monitors metrics and diagnoses issues to give customers insights into their business operations, as well as a new spatial analysis capability to its Computer Vision cognitive service. This aggregates information from multiple cameras to assess how many people are in a room and how close together they are to help with social distancing measures for example.

The moves exemplify a shift in Microsoft’s strategy towards helping firms scale AI projects and deploy more intelligent business solutions through a clustering of general purpose AI models and API services including image classification, speech, sentiment, language and others to enable specific business outcomes. We expect a deepening focus on business solutions and in particular, spatial-based services in media and retail environments, building on its showcase of its Flight Simulator application which kicked off the event.

A final noteworthy area in Microsoft’s AI business has been Responsible AI, a domain where Microsoft differentiates itself following several important announcements at Build earlier this year. It released Project Trove, a new application that connects individuals with AI developers in a marketplace for the responsible, commercial exchange of data for AI. Available in open source, the initiative is a good step towards helping developers build trust in the technology.

In fact, trust overall has become a crucial theme during the health crisis as enterprise dependency on technology, particularly cloud computing, has escalated. Microsoft has excelled at the intersection of innovation and trust  in recent years and this where the integration of Microsoft’s capabilities has been crucial to its position in the market.

The standout area in this regard was in management and several enhancements to Microsoft Endpoint Manager in particular. These included Microsoft Tunnel, a new capability which provides remote access to on-premises applications and resources, the support for virtual endpoints including Windows Virtual Desktop, the inclusion of Endpoint Manager controls in Microsoft Edge browser, along with support for shared business iPads. Satya Nadella and corporate vice president Brad Anderson both highlighted the resurgence over the past six months of the PC, as the tool became mission-critical during the pandemic. The advancements and integrations in management will be welcome by many customers who, according to our data, found the deployment of employee devices as the top current challenge with supporting remote workers.

While the moves in this area, along with several other important advancements across security and identity, may not always drive headlines, we view them as one of the key reasons why Azure adoption has surged during the pandemic. A picture is emerging around Azure as being the “trusted cloud” for business and IT leaders and this is reflected in Microsoft’s almost unique focus at the intersection of innovation and trust as part of its strategy at the moment.

Above all, Ignite showcased how the connective tissue between Microsoft’s array of cloud products is rapidly strengthening. While more work needs to be done with LinkedIn and in expanding Azure’s vertical industry capabilities beyond healthcare for example, it is this continuing effort around the integration of its portfolio that is perhaps one of Microsoft’s biggest assets in the cloud computing race.

It also helps to address one of its biggest challenges: fueling adoption across its at times overwhelming technology stack. Satya Nadella's "tech intensity" concept continues to play a crucial part in addressing this challenge, along with its investment in customer success.

But Microsoft is also organizationally shifting towards focusing on more business-oriented solutions (versus product-oriented ones) and in industry-specific challenges, which gives new urgency to this integration effort.

With a new economic reality now facing swaths of companies, this strategy will become vital as it navigates weaknesses in IT spending and helping customers recover and grow in 2021.

5 Ways an Intranet Can Help With Talent Retention

Designing the Workplace of the Future