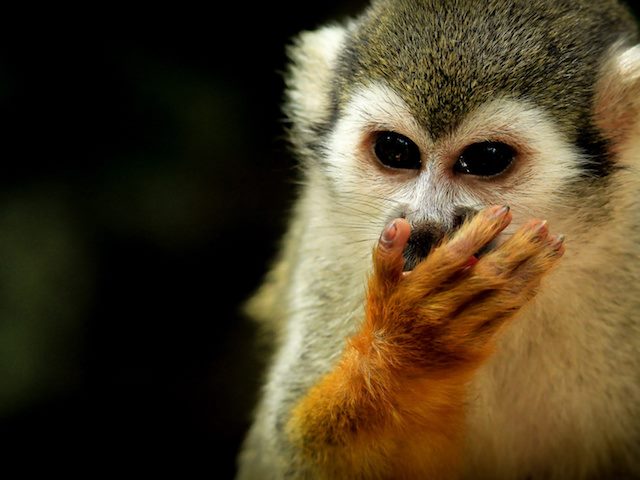 What Surveys Can’t Tell You About Hybrid Working

We've all been bombarded with surveys on how we’re coping with work since the beginning of the COVID-19 pandemic. Survey reporting has helped us better understand how employees are working and feeling during the current transition to hybrid working.

Surveys are great for soliciting subjective health and well-being, or work overload feelings, from employees, providing useful insights for employee engagement initiatives. What surveys are less useful for is finding out what people actually do in their work. Researchers have known this for some time, leading to a whole branch of observational research techniques. At my firm, SWOOP Analytics, we use a passive observational technique called “reality mining,” a technique designed to study human interaction patterns through analyzing the digital trails left by employees as they work.

SWOOP Analytics recently released a comprehensive study of how people have been working digitally, based on the Microsoft 365 office suite usage over a six-month period to March 2022. We analyzed individual usage patterns from anonymized data collected from the Microsoft 365 Admin Reporting Systems of 18 globally distributed organizations, 213,411 active Microsoft 365 accounts (includes guests) and 3,773 groups/departments. Additionally, we devised seven best practice collaboration habits, from which we could quantitatively assess the relative digital competencies of employees, then aggregated into their organizational groupings. We believe this massive undertaking has provided us with unique insights that are simply invisible to survey methods.

How Do People Spend Their Time? 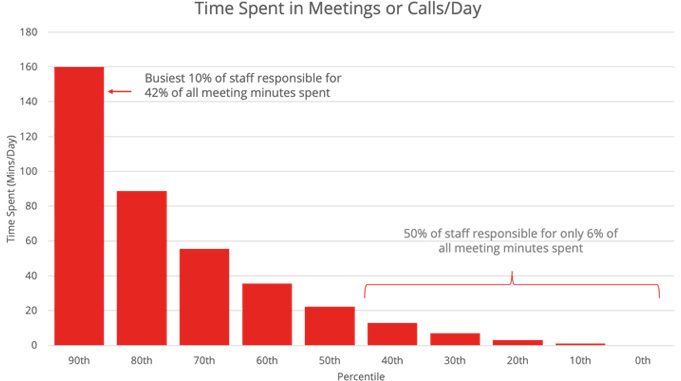 An important insight is that the much maligned over-connected make up less than 10% of most organizations. The majority of employees are, if anything, "digitally disconnected." When we analyzed time spent in calls and meetings, 42% of the total time spent was consumed by the busiest 10%. Yet the least connected 50% consumed only 6%. And a surprising 18% had no online meeting time over the full six-month period. We see similar patterns of use for email, Microsoft Teams chat and channels, Yammer and SharePoint intranets. We would argue the prime issue with hybrid working may not be digital overload, but the digital underload of the "digitally disconnected."

Related Article: Most of Us Aren't in Too Many Virtual Meetings 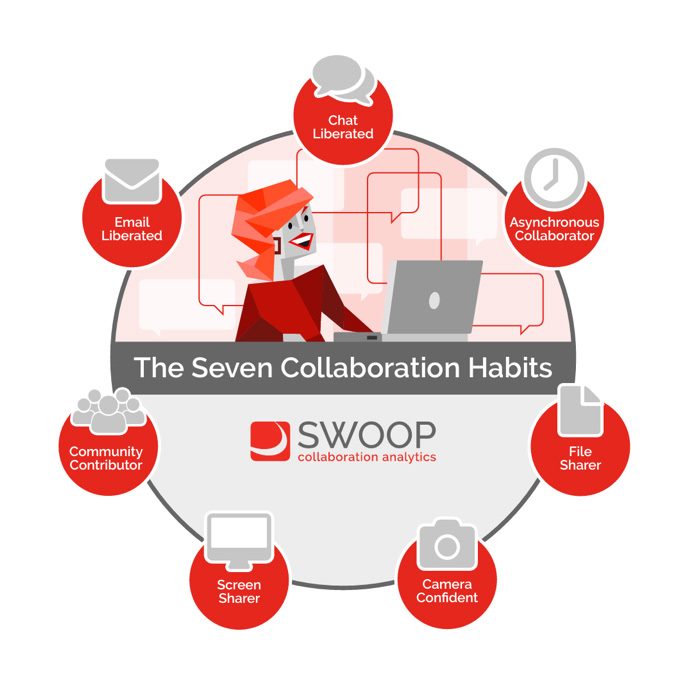 The good habits of being Email Liberated, Chat Liberated and an Asynchronous Collaborator measure the extent to which one moderates the stress from too much email, chat, calls and meetings by using the preferred asynchronous communications in Teams Channels and Yammer.

The Community Contributor assesses how one balances enterprise interactions in communities on Yammer and day-to-day work on Microsoft Teams. File Sharers prefer working in the SharePoint environment over the private OneDrive spaces.

What happens when group or team members have vastly different digital habits?

You might predict that when a group or team members have totally different work patterns, the effect on collaboration is disastrous. When we plotted the average digital habits performance for a group or team against the in-group variation, we uncovered a curious boomerang pattern: 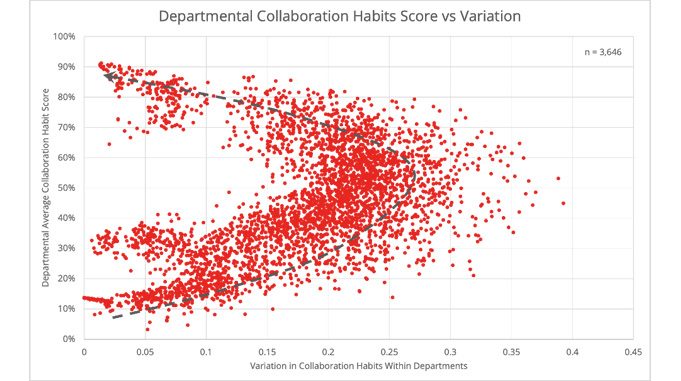 The boomerang pattern suggests that groups move through a learning journey in building their digital competence. There will be a period where digital leaders and laggards will exist in the same groups, creating a high variance, and likely high stress, in the group. However, if the leaders are successful in influencing the behaviors of their laggard colleagues, the team can move towards higher collaboration habit performance, with all the collaborative benefits accruing.

By measuring where your groups exist along the boomerang learning journey, you can better tailor training and support services. We suggest training in groups is the key to leveraging peer-to-peer learning. For those groups below the 50% mark, more intensive training support is required. For those with advanced to higher levels of performance, support can migrate to supporting the more competent leaders to achieve agreed ways of working with their group colleagues.

Organizational Leaders Are Stepping Up to the Mark

In the rush to working from home in 2020, office-based managers became the most disenfranchised. Those who “managed by walking around” needed to quickly adapt to the digital environment if they were to remain relevant.

We identified roles containing: “Leader,” ”Supervisor,” ”Manager,” ”Managing,” ”Lead,” ”Partner,” ”Principal,” ”Director,”  ”Executive” and ”Head.” Some 12,613 staff were classified as “leaders,” leaving the remaining 36,586 as “non-leaders.” Leaders outperformed non-leaders by 25% in collaboration habits. This is good news for hybrid working. By leaders visibly modeling good digital habits, employees are more likely to follow their good example. And there are significant rewards for leaders and their organizations by promoting good collaboration habit performance.

In our benchmarking study we identified the Asynchronous Collaborator and Email Liberated habits as the most prospective for tangible returns on investment (ROI). We conservatively calculated the personal time that could be saved by substituting a proportion of meeting and email time spent, with the more effective and efficient asynchronous messaging of Teams channels and/or Yammer. We calculated from our benchmarking data, that individuals on average could save 26 minutes a day by adopting better Email and Meeting practices. For an organization with 10,000 staff this is equivalent to a more than $70 million annual savings or a 5%+ increase in headcount.

How to Get on the Hybrid Working Excellence Train

What creates hybrid working excellence is still very much an unknown. Organizations are being forced to experiment and adapt rapidly. This cannot be done without good workplace data analytics, operating in close to real-time. While increasing digital activity levels is important, it is the digital collaboration habits of individuals that will eventually dictate what works or not.

At this still early stage of moving to hybrid working, it is good to hear stories of how some groups have successfully adapted. Our benchmarking has been able to identify such groups, some of whom have agreed to be interviewed and have their stories shared.

We were excited to see how these leading groups were inviting their customers and other external stakeholders directly into their collaboration spaces to achieve extreme levels of stakeholder engagement. We saw examples of new organizational structures customized to hybrid working. We heard stories of how intensely co-located agile teams migrated to virtual work, and actually improved their performance.

Our Microsoft 365 Benchmarking 2022 report is available for free download.